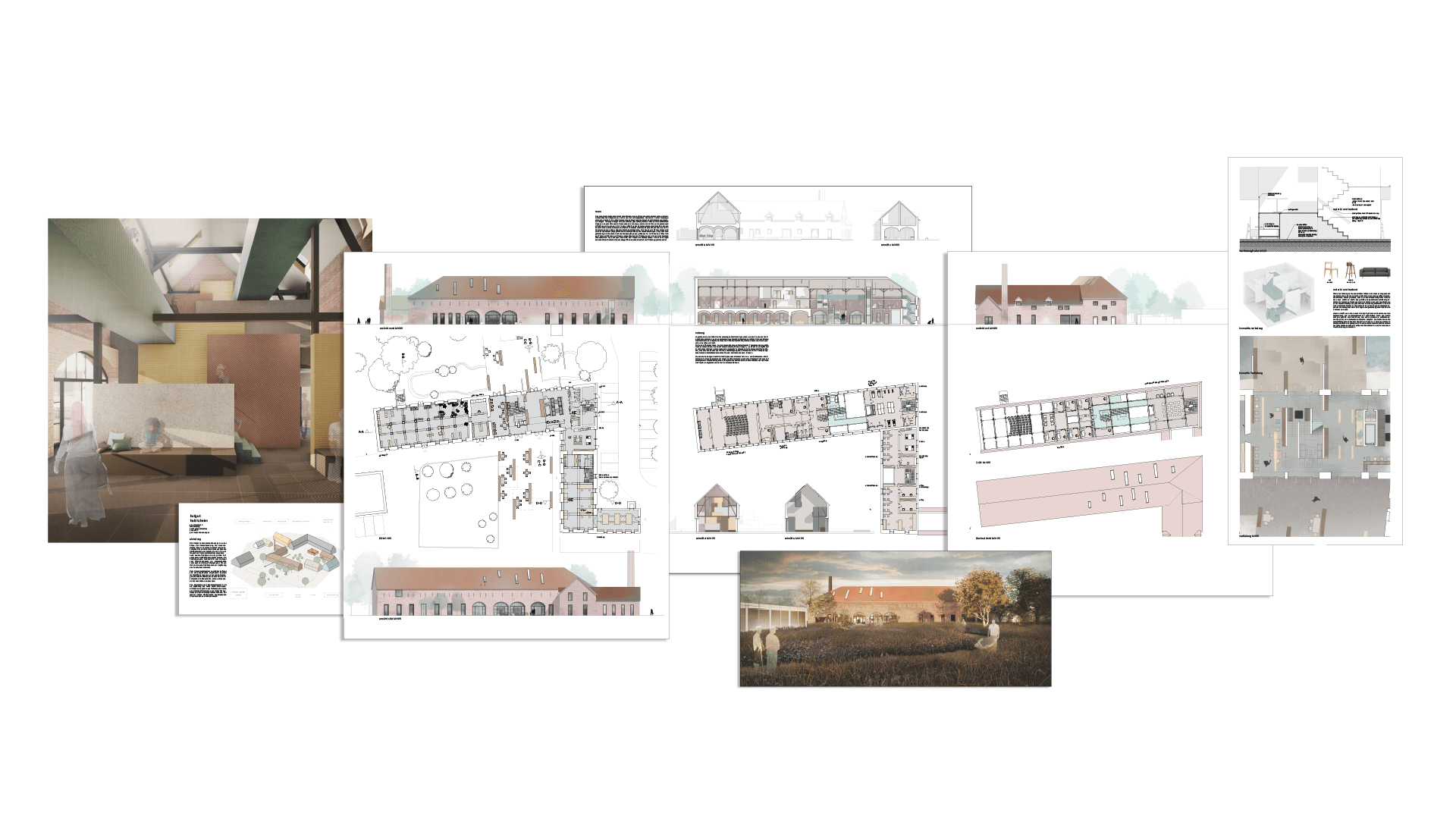 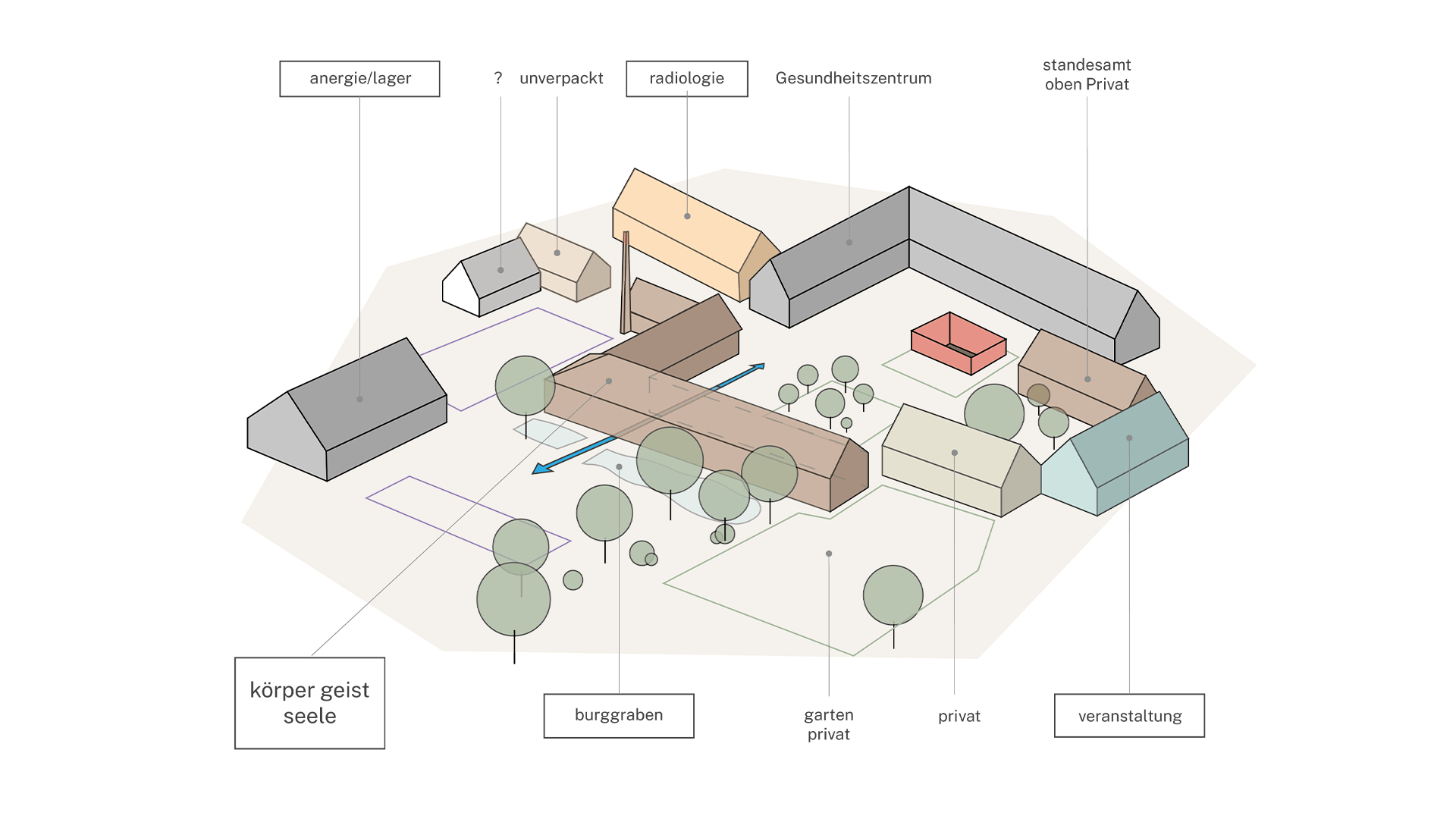 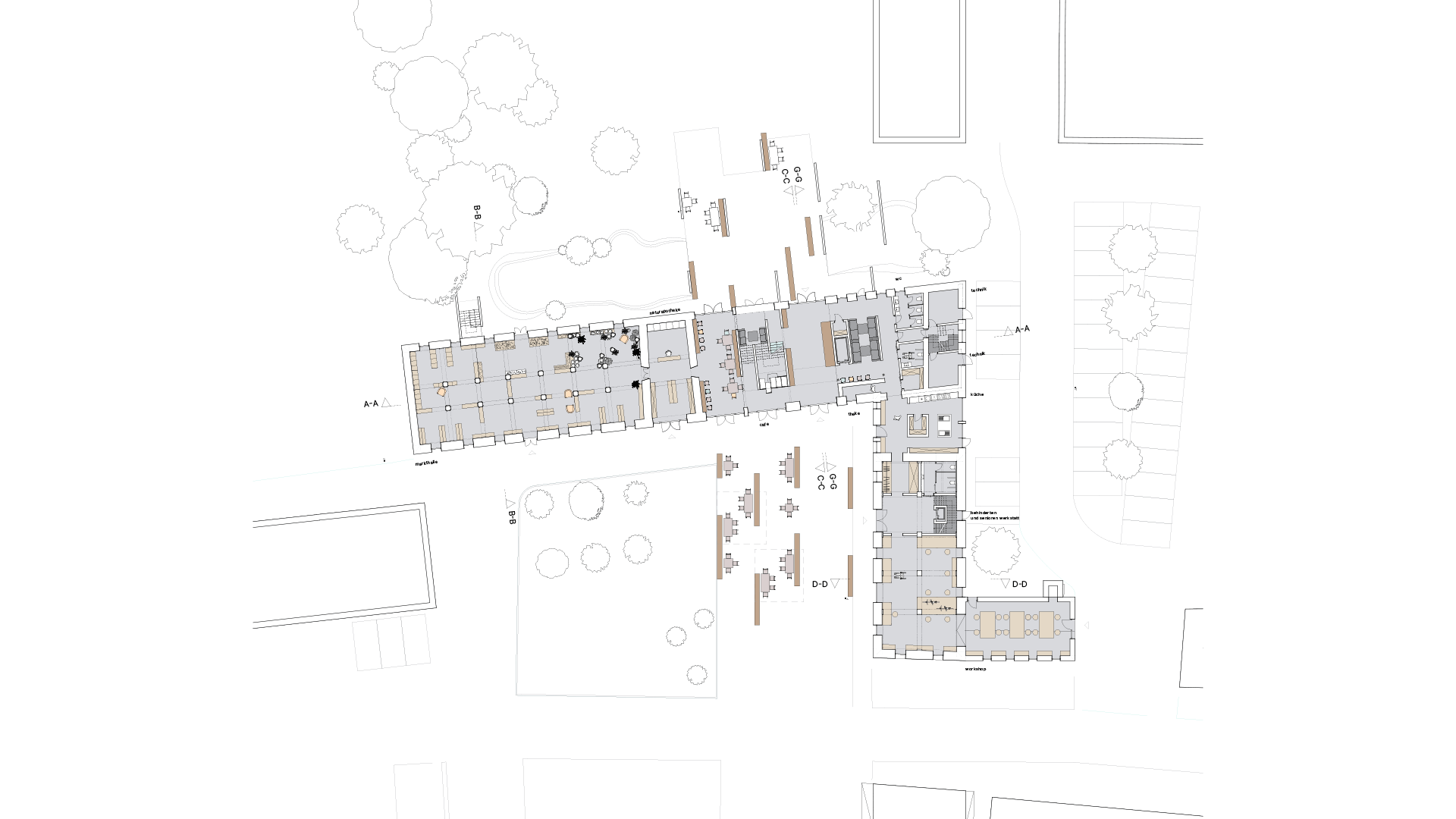 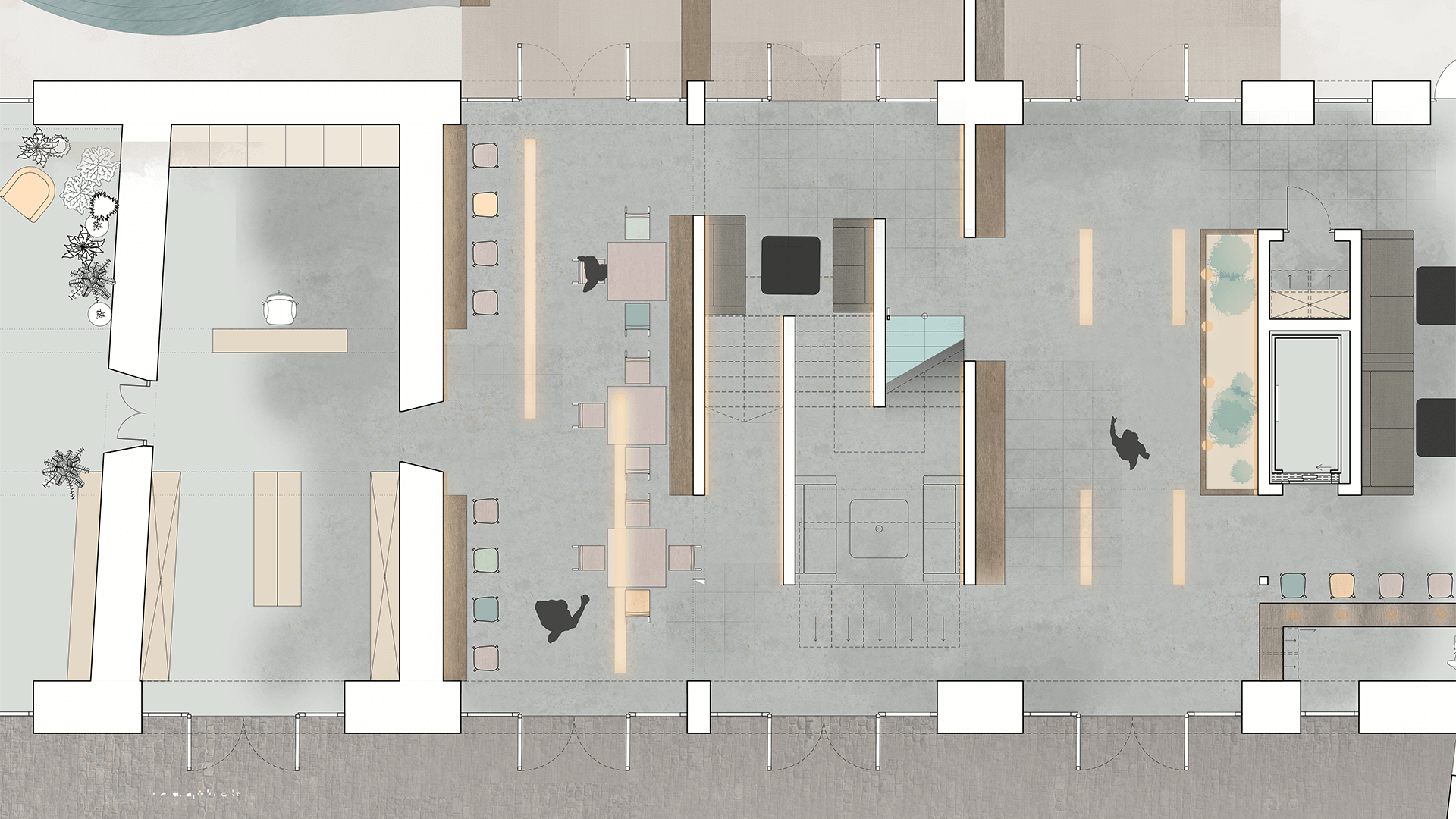 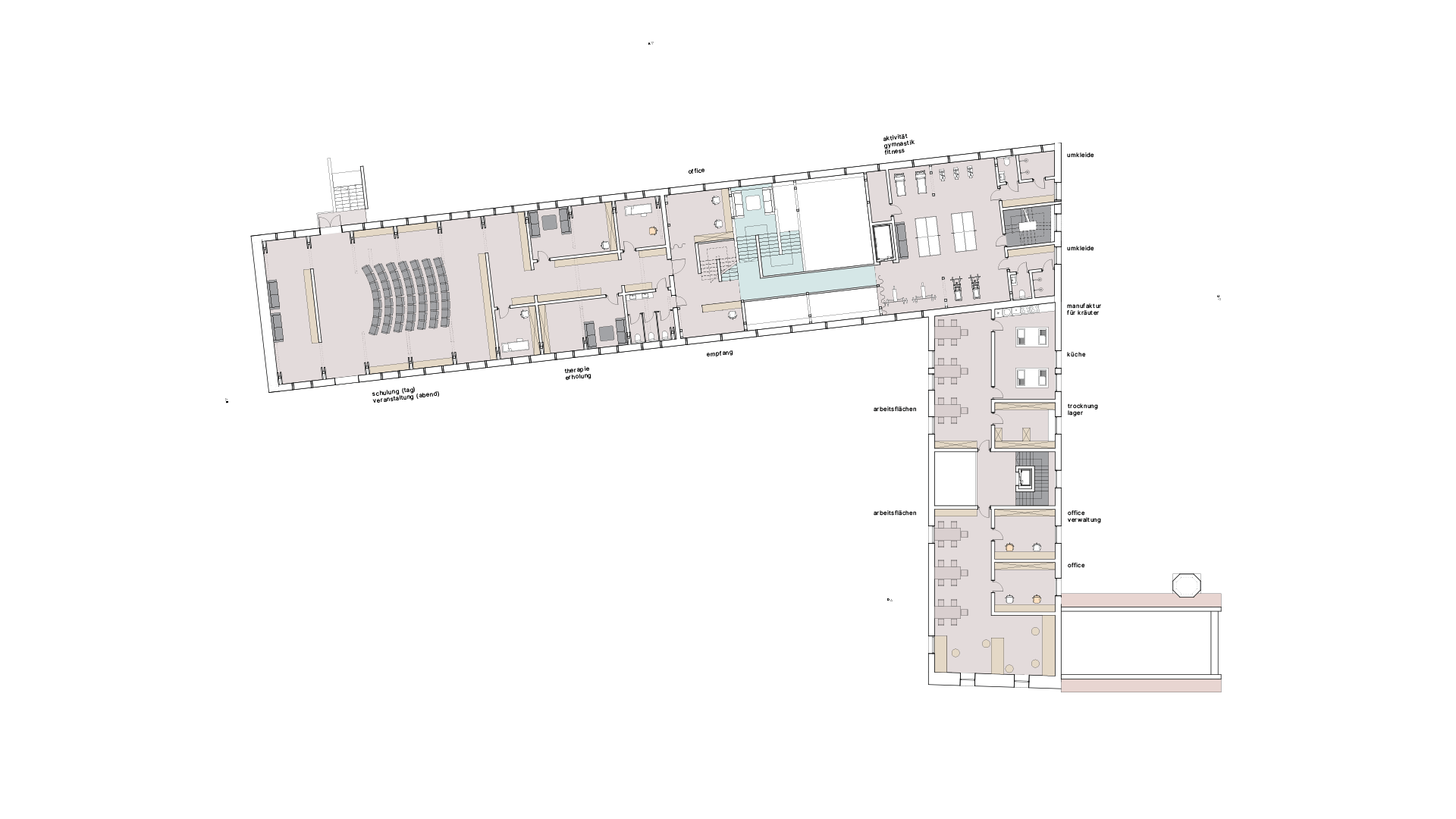 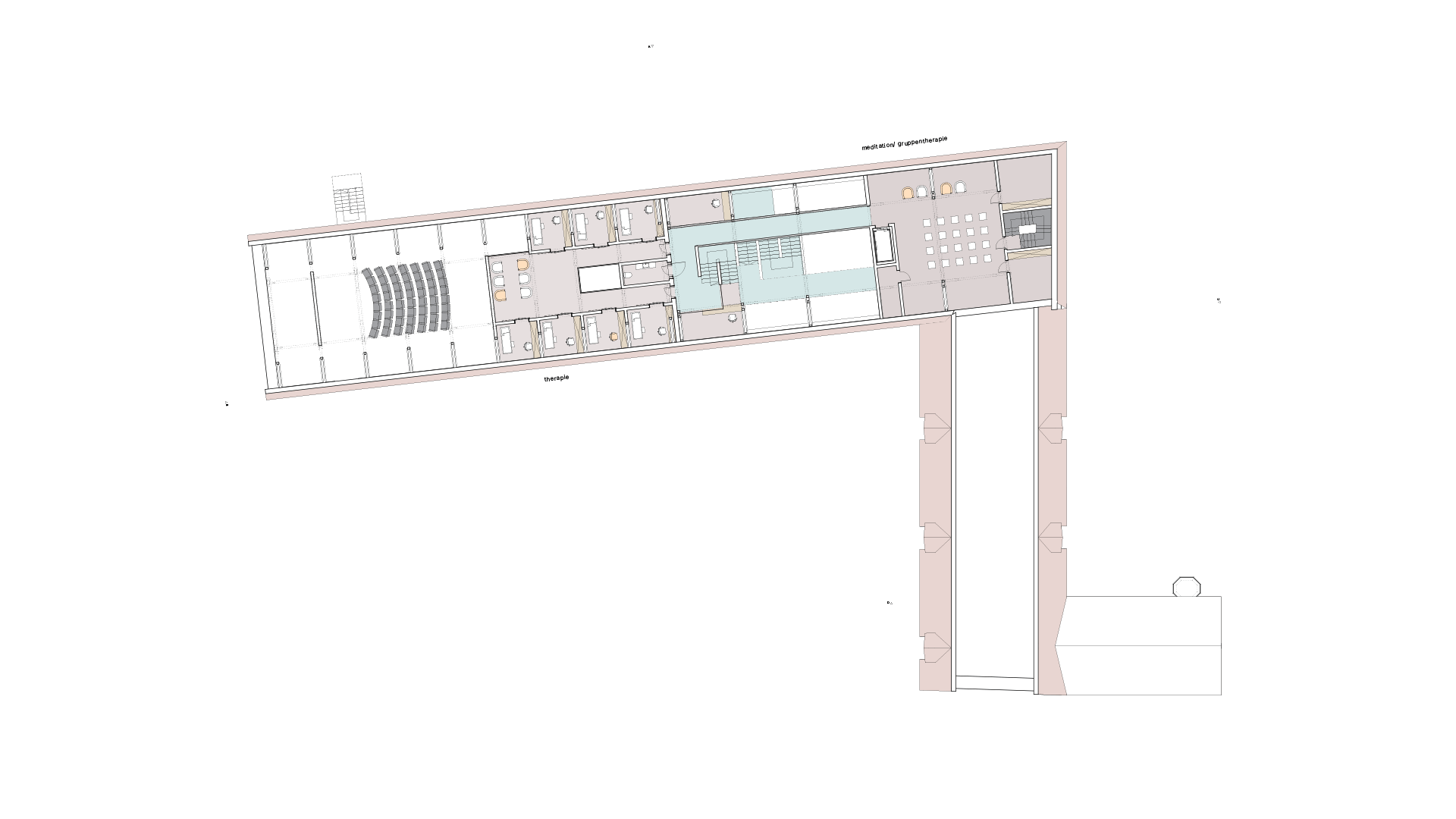 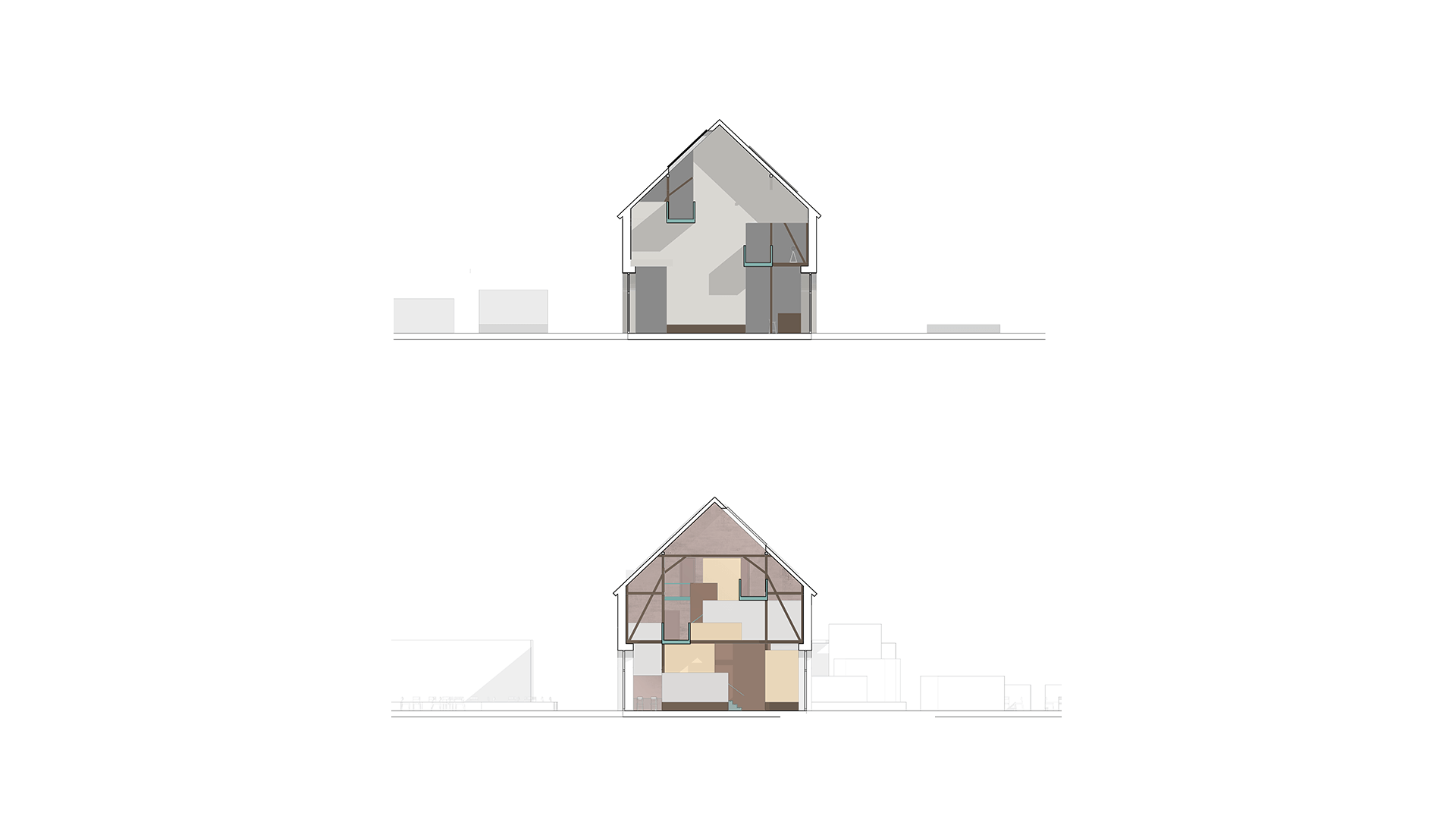 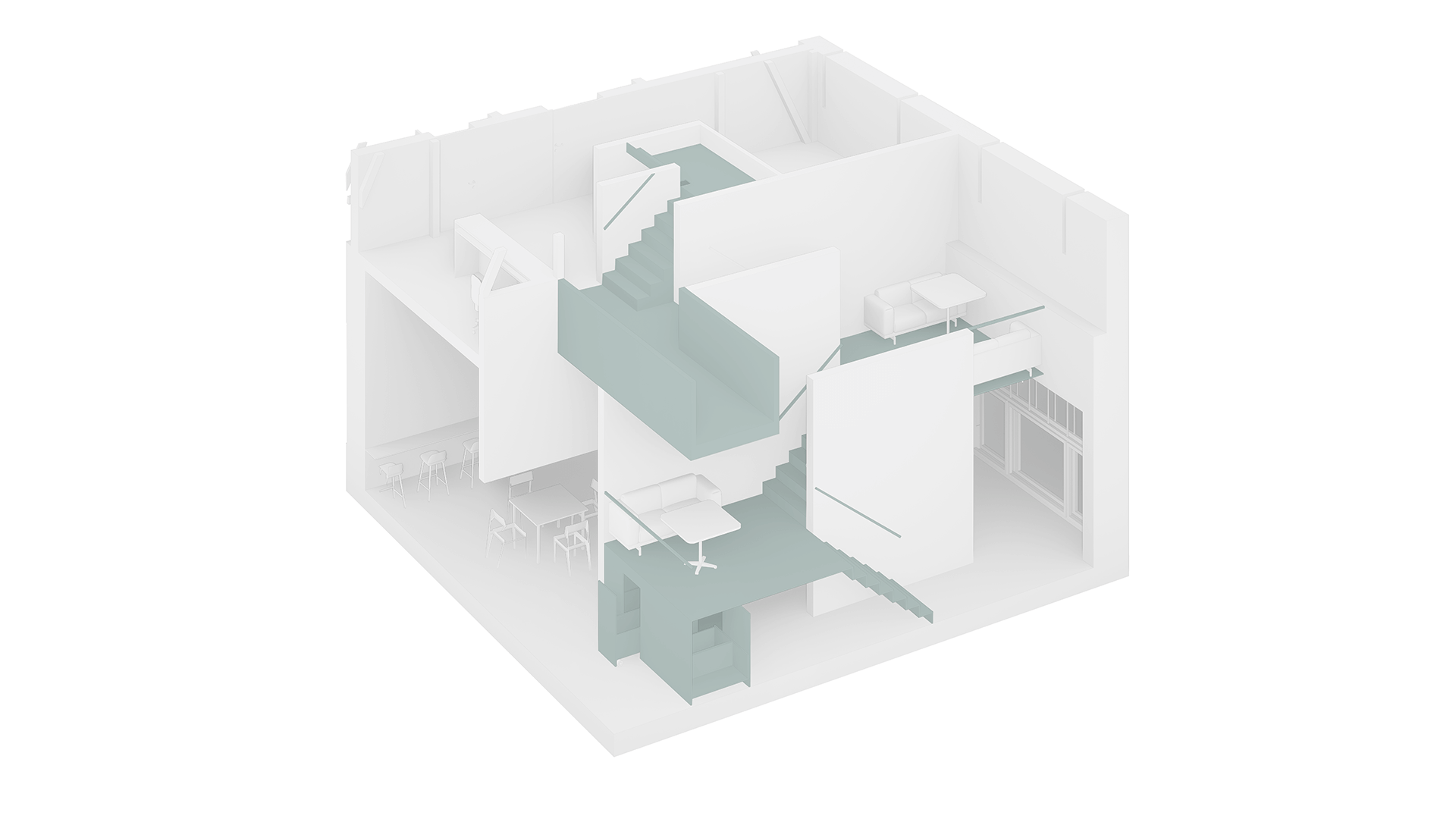 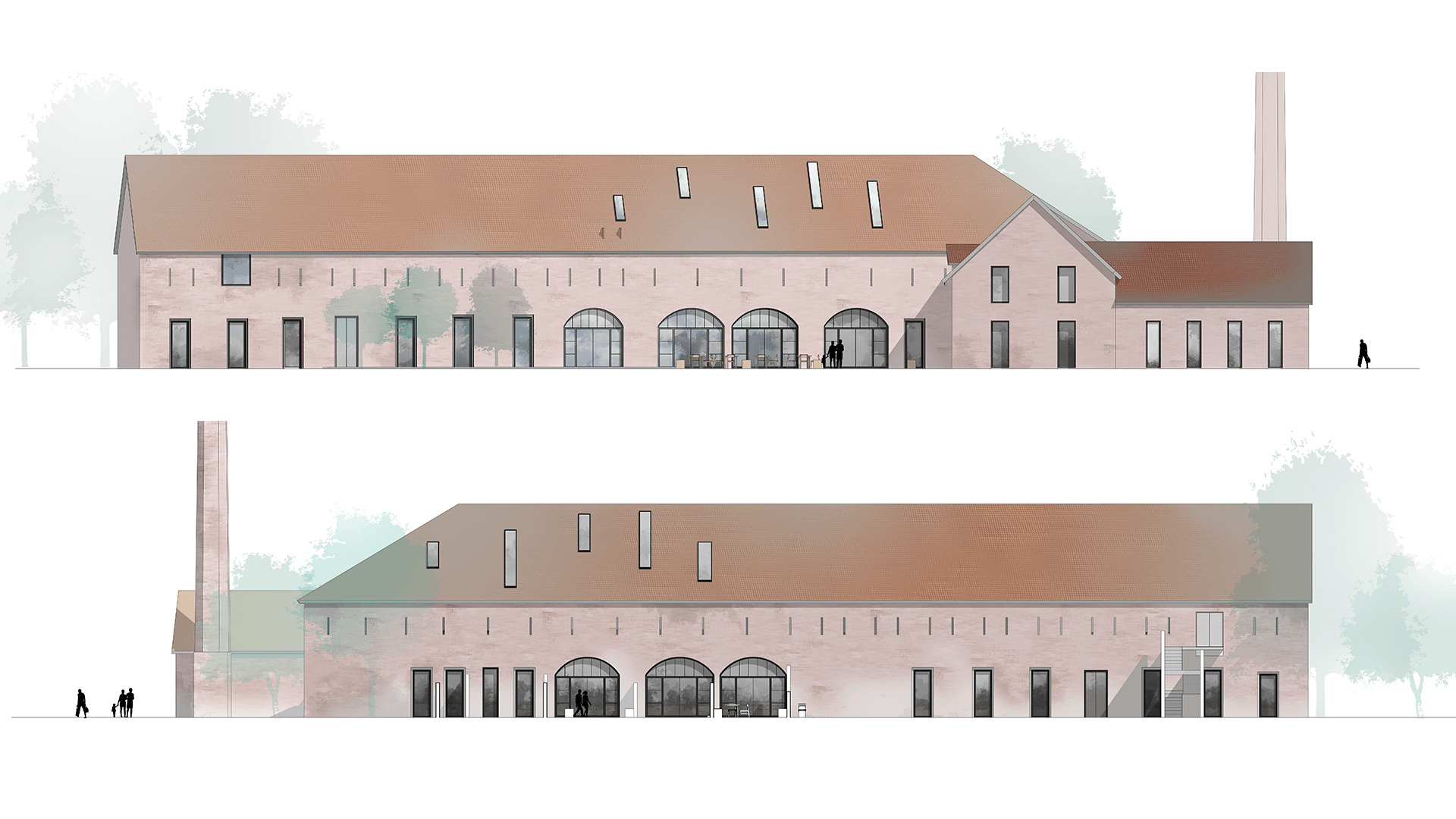 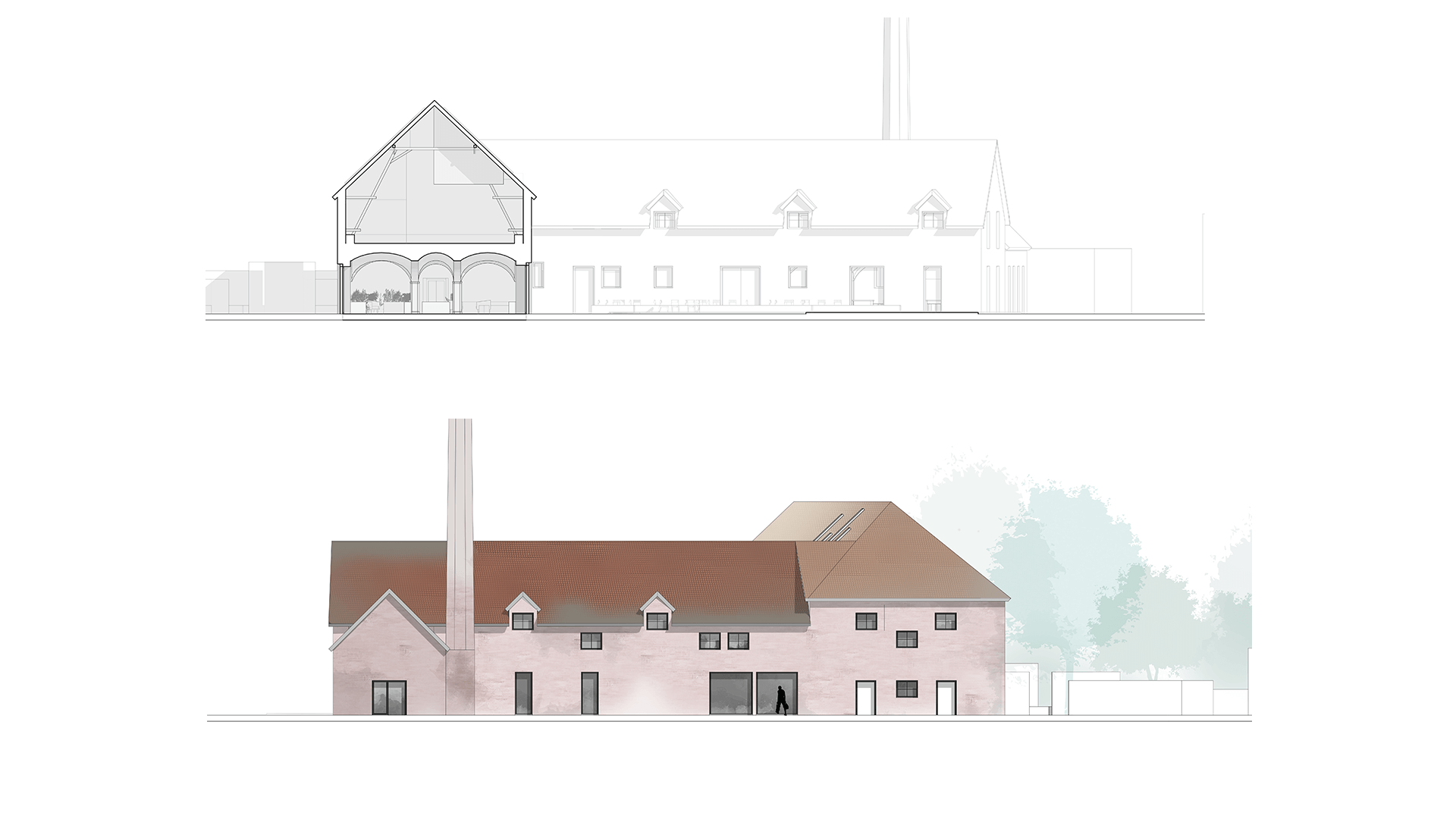 The Farmstead Habitzhheim is in a phase of restructuring and reorientation. One of many in its long history. A good third, and thus the entire east wing, has already recently been converted into a comprehensive health center.
Other building parts of the large farm estate are also to be converted in the future. The centrally located barn will be transformed from a lumberyard into a venue for events, the machine shop into a storage facility and energy supply point for the farm, and other parts of the building will complement the health center.

Opposite the health center is a mainly unused stock in the west wing, which is to be filled with new uses and life. Thereby 3 different building heights as well as deviating floor heights have to be considered.

An extension of the space program is the addition of a new chapel in the center of the courtyard. As well as an accommodation in the north of the courtyard for assisted and disabled living. In the future, the courtyard should offer these an appropriate place to live and work.


The new utilization concept provides expansion of the health center as well as the farm's agricultural functions. The space to be occupied will be divided into two units of use. The more northern long building block and the two angled adjacent building blocks. In the long wing a center is created, which is supposed to connect the floors with each other as well as the yard with the adjoining green area with a staggering staircase at an air space. The staircase runs behind several wall panels that divide the space into small intimate areas. This central space will house the courtyard café, with seating on both sides facing the outside. The theme of the walls is also taken up in the outdoor space, zoning the spaces for the furniture arrangements, but at the same time directing people towards the main entrances of the building. On the courtyard side the theme is developed with benches and tables on the green side with partially transparent wall panels. On the roof, too, the theme of the wall panes is taken up again in the form of long narrow skylights and connects the courtyard and the green area.

Adjacent to the café, a market hall with flexible furniture will be arranged in the former stable on the first floor, which will allow for different (market) uses. This includes a permanently installed natural pharmacy between the café and the market hall, which, among other things, sells the farm's products.
The two upper floors are filled in the large long part with a therapy center, which allows different types of therapy (music, art, groups, ...). In addition, a small lecture room is planned in which trainings and seminars can take place, but which can also be used for meetings in the evenings. The therapy offers will be supported by a fitness and meditation area.

The other utilization unit on the first floor will be filled with a workshop for the elderly and disabled. With a new building in the north, these will also be provided with accommodation in the courtyard. On the upper floor there is a manufactory of the pharmacy where products can be produced and marketed.

for the realization of the new structure, especially on the first floor, the existing walls had to be partly removed and supplemented with new ones. In doing so, care was taken that the new structure preserves as much of the existing structure as possible. For example, the vault is completely preserved. In the area of the facades, the existing structure is only touched where it seems necessary to harmonize the overall picture. thus, many of the small windows on the first floor are pulled down to the floor to create a homogeneous picture and at the same time to let more light into the interior.

The materiality of the interior is characterized by the existing red calcareous sandstone and brick masonry of the exterior walls as well as the dark wood of the beams. The interior walls, new and old, are plastered in earth-toned tones with different textures. The colorful as well as material-aesthetic contrast is formed by the striking steel staircase, which is designed in a petrol color. In the other rooms, mainly lighter wood tones are used as furniture with color accents and light plaster as wall cladding.