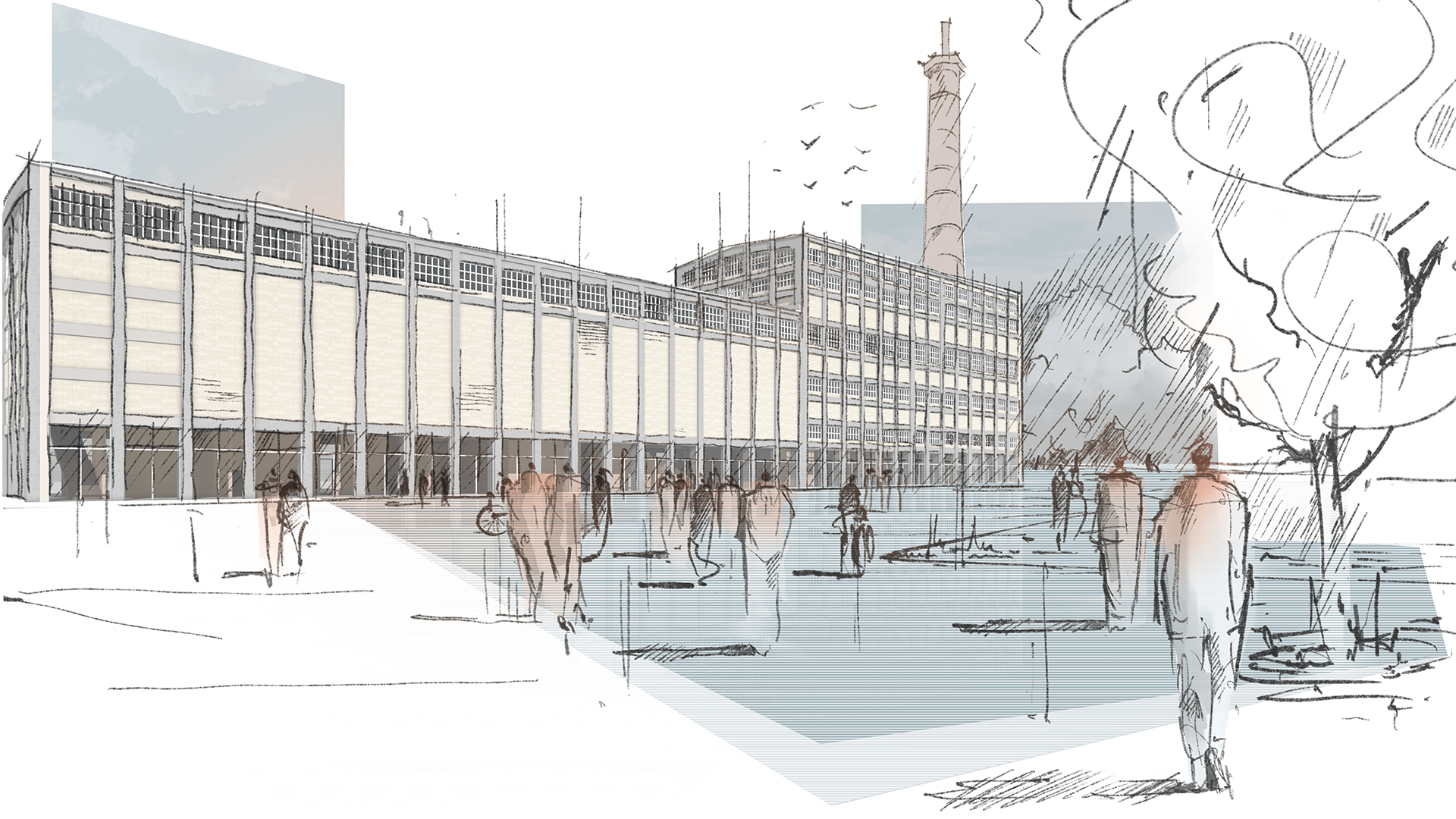 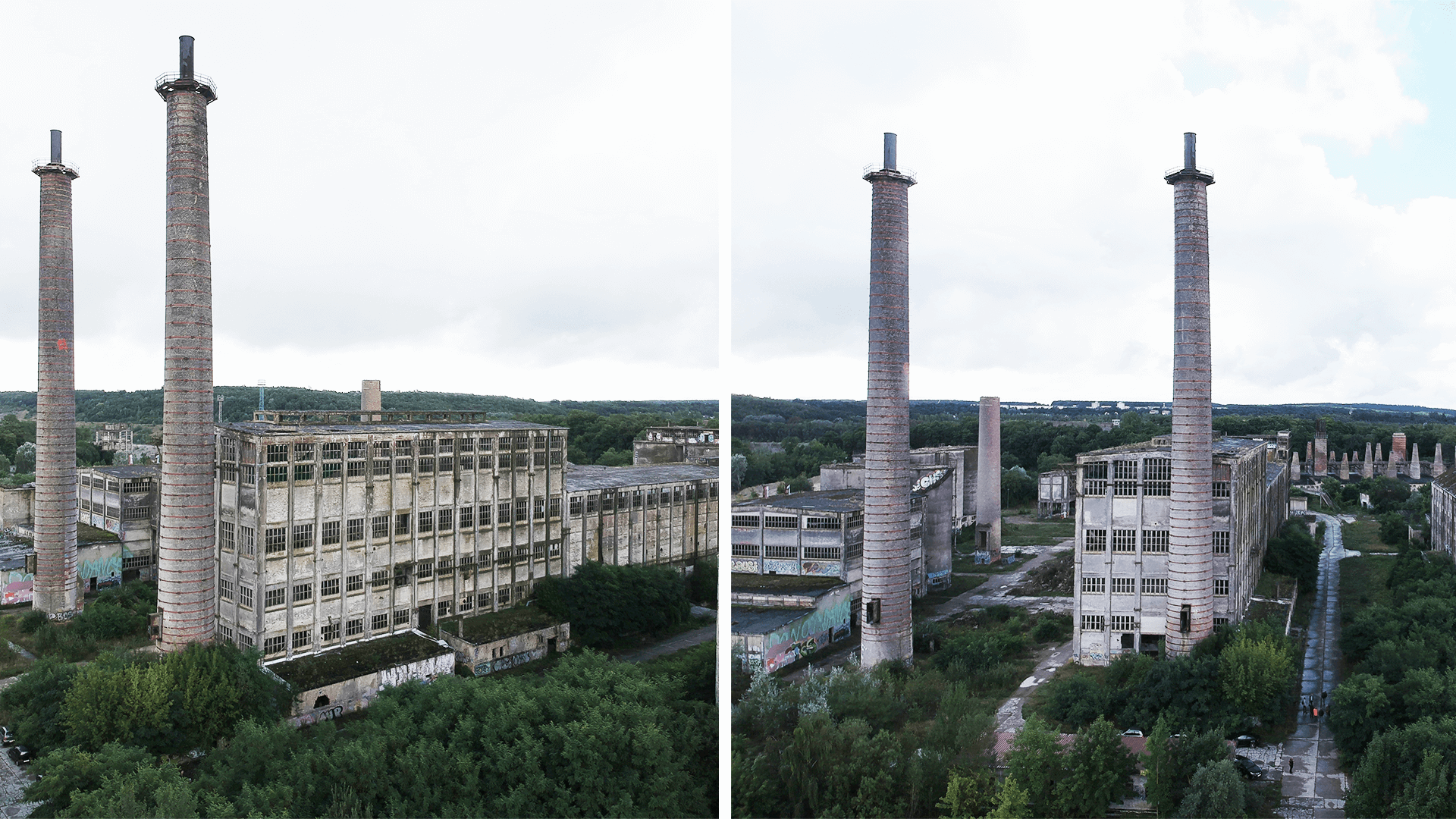 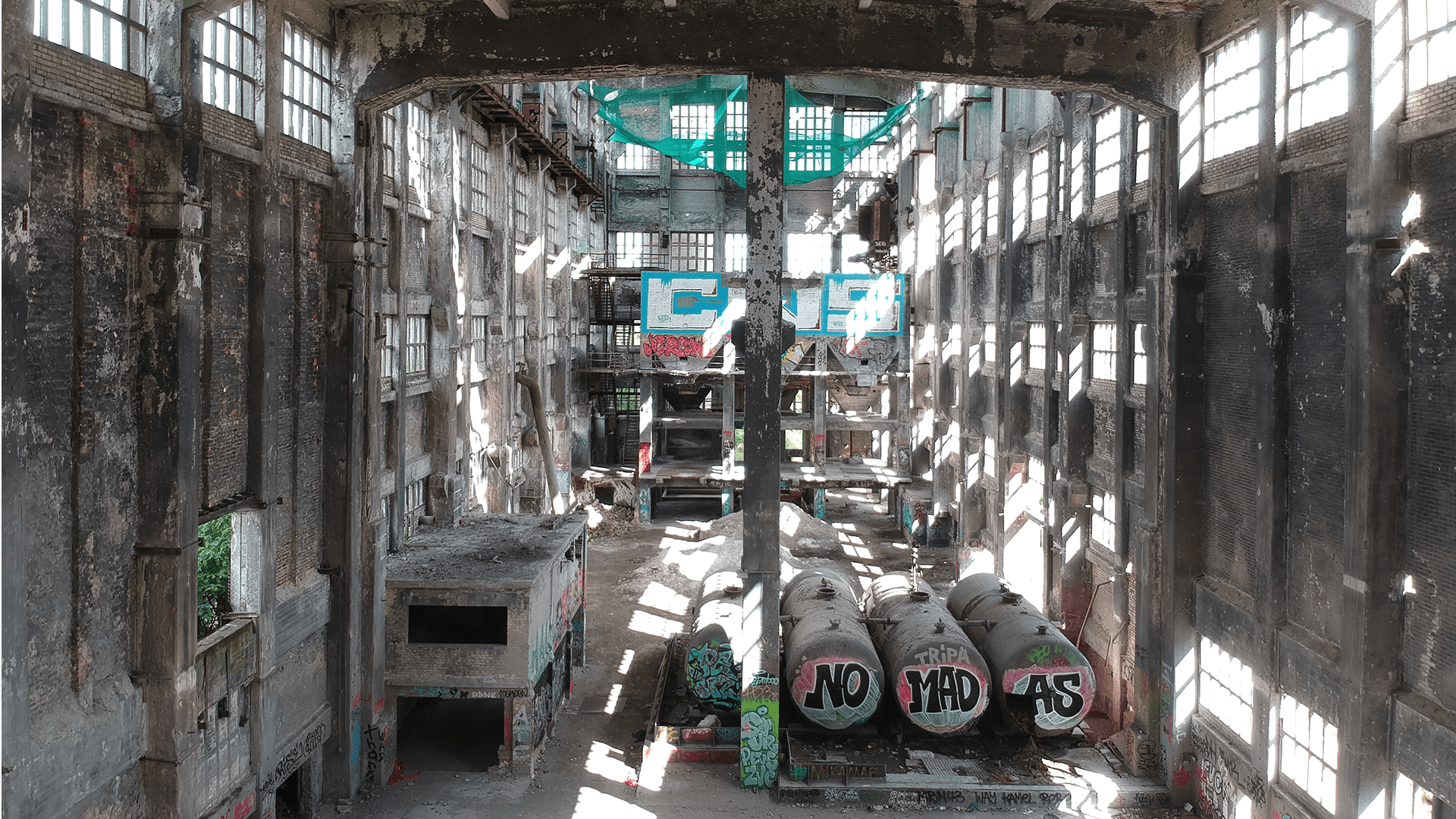 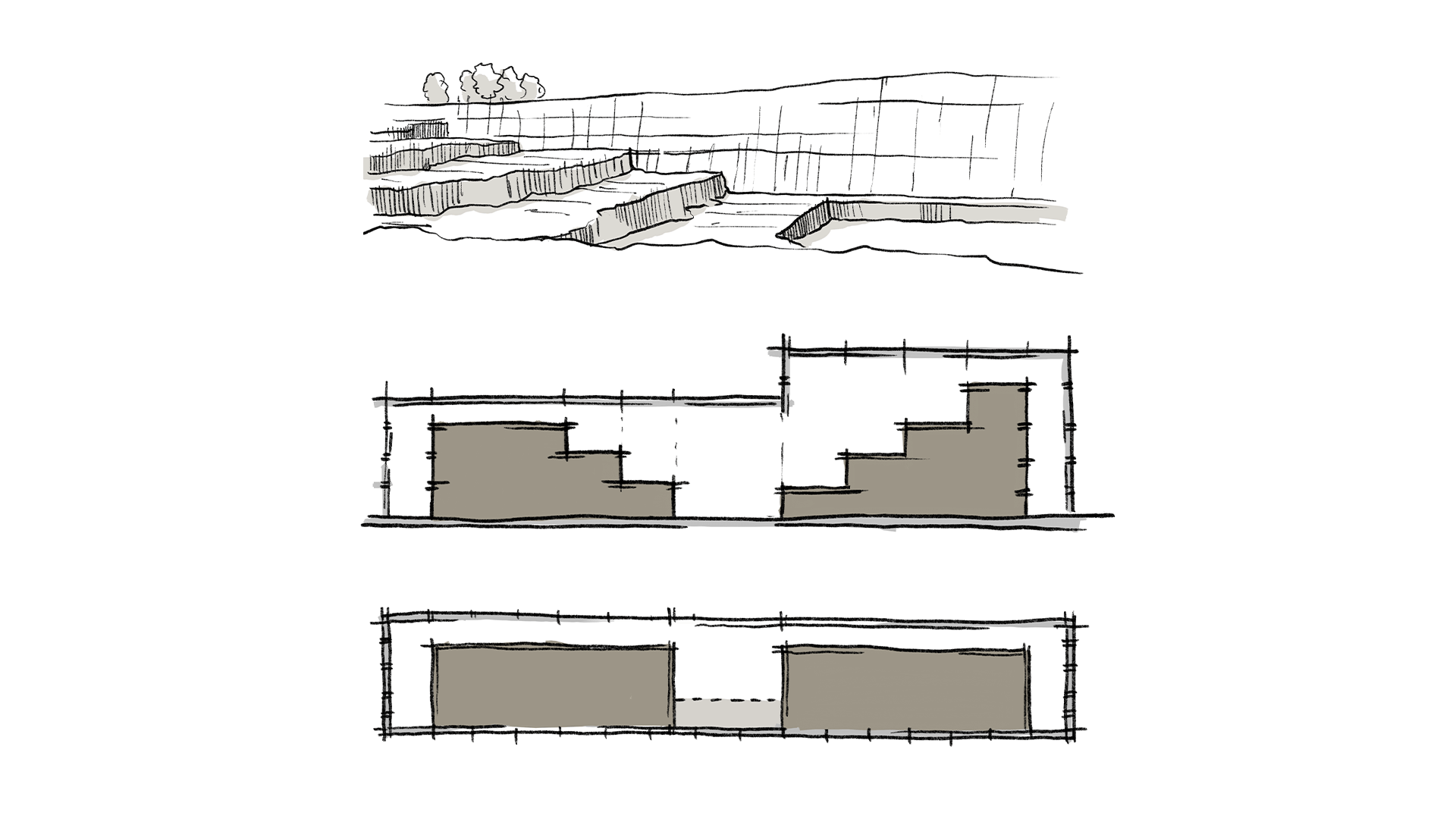 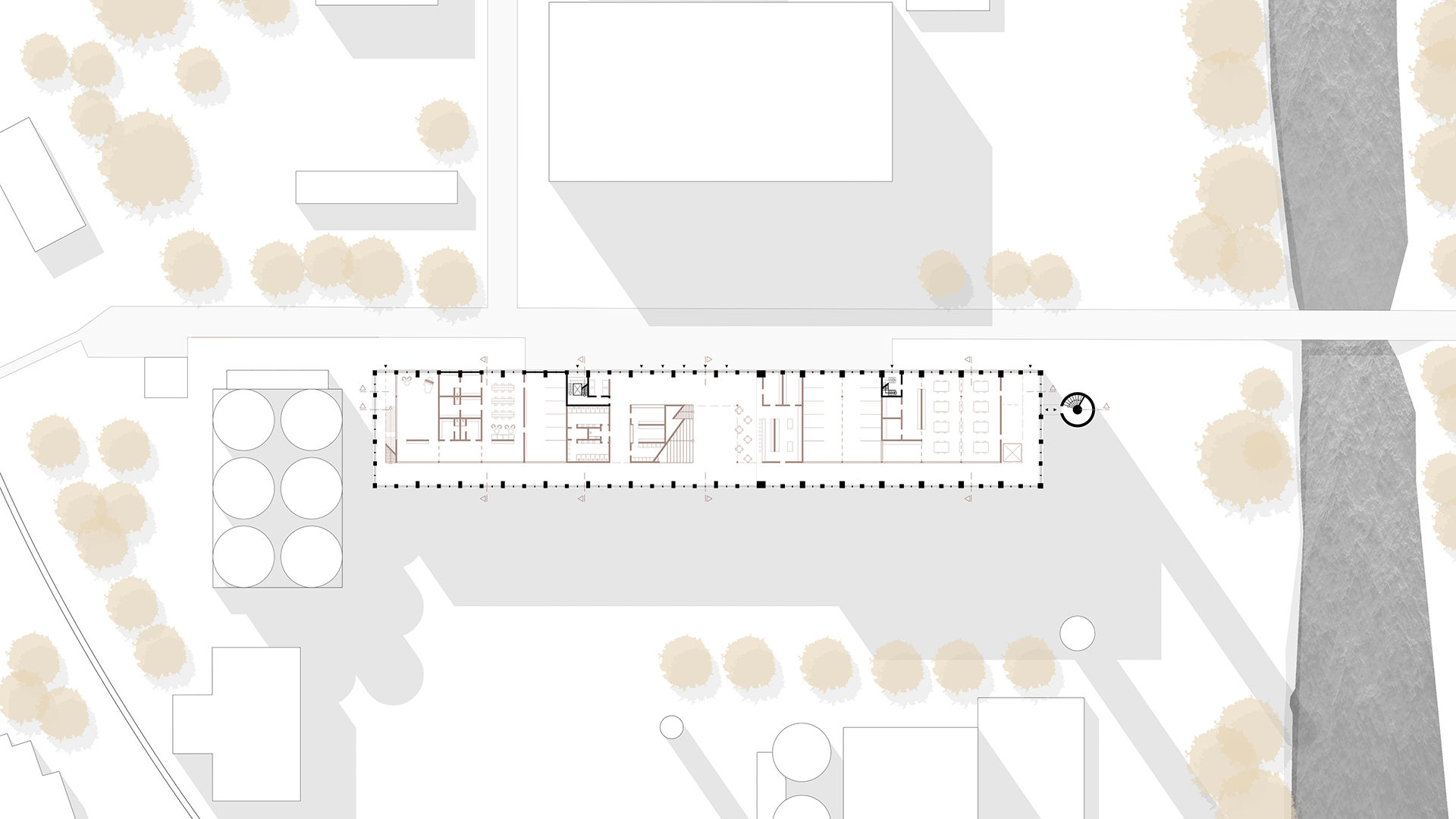 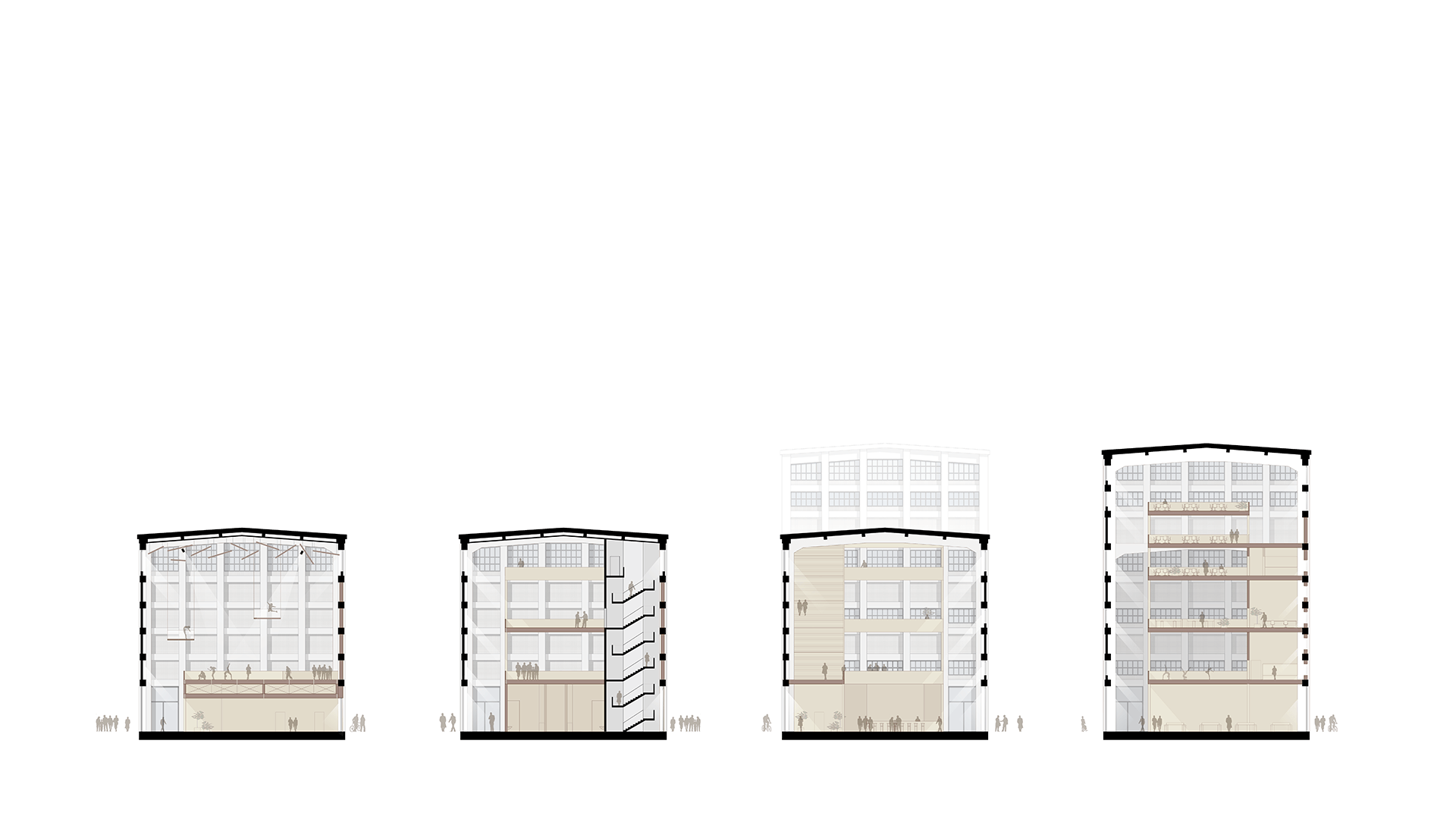 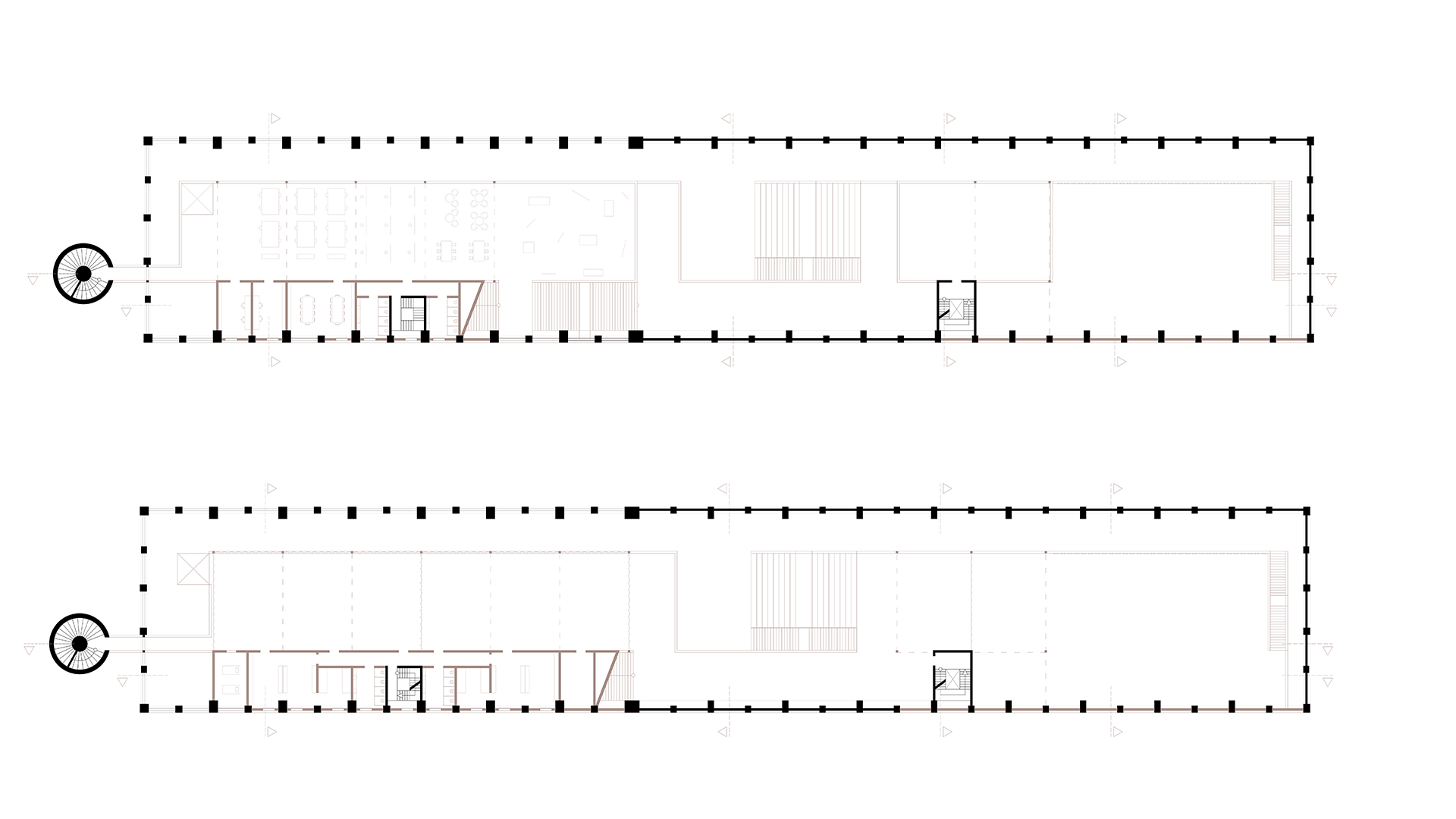 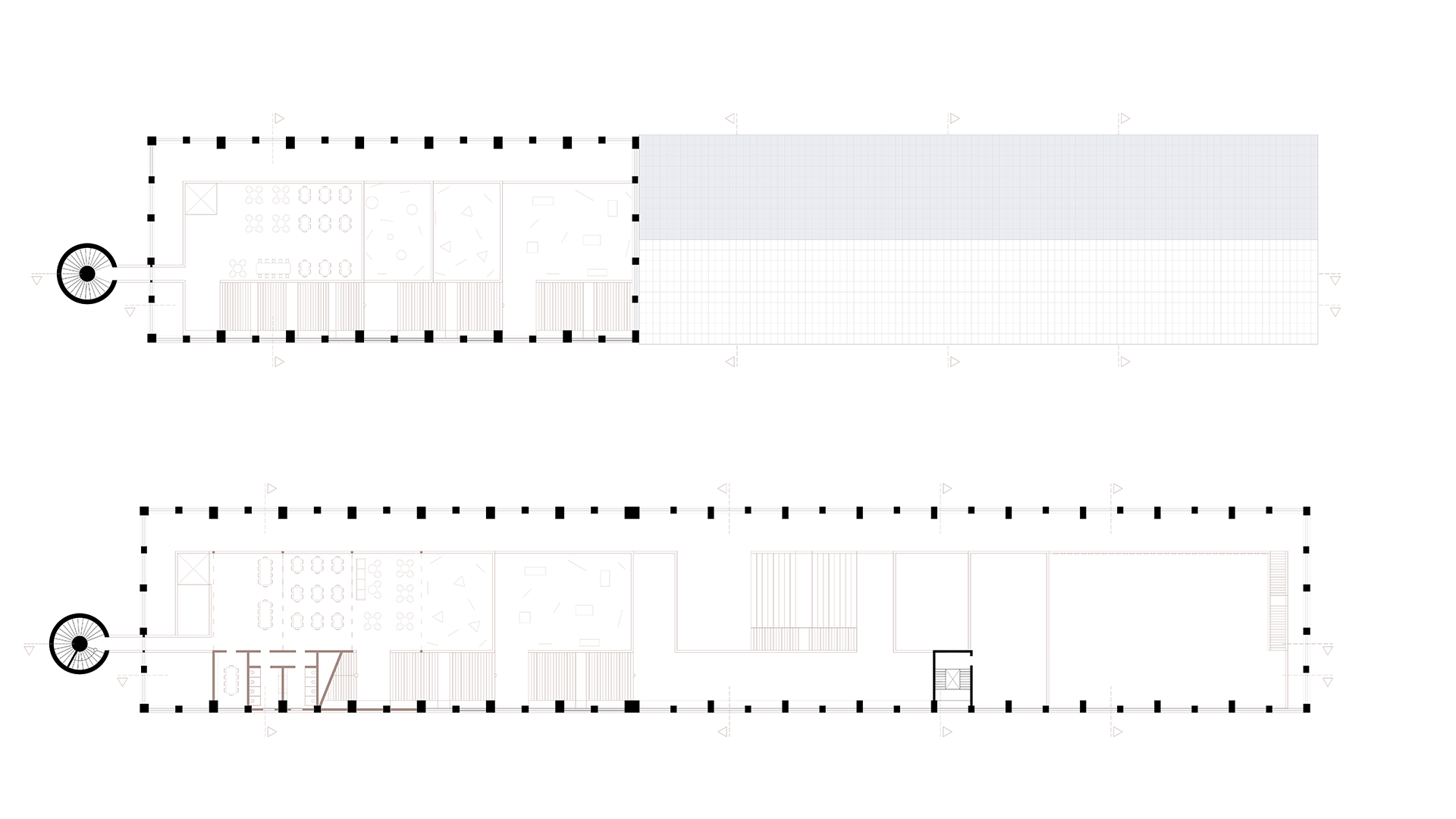 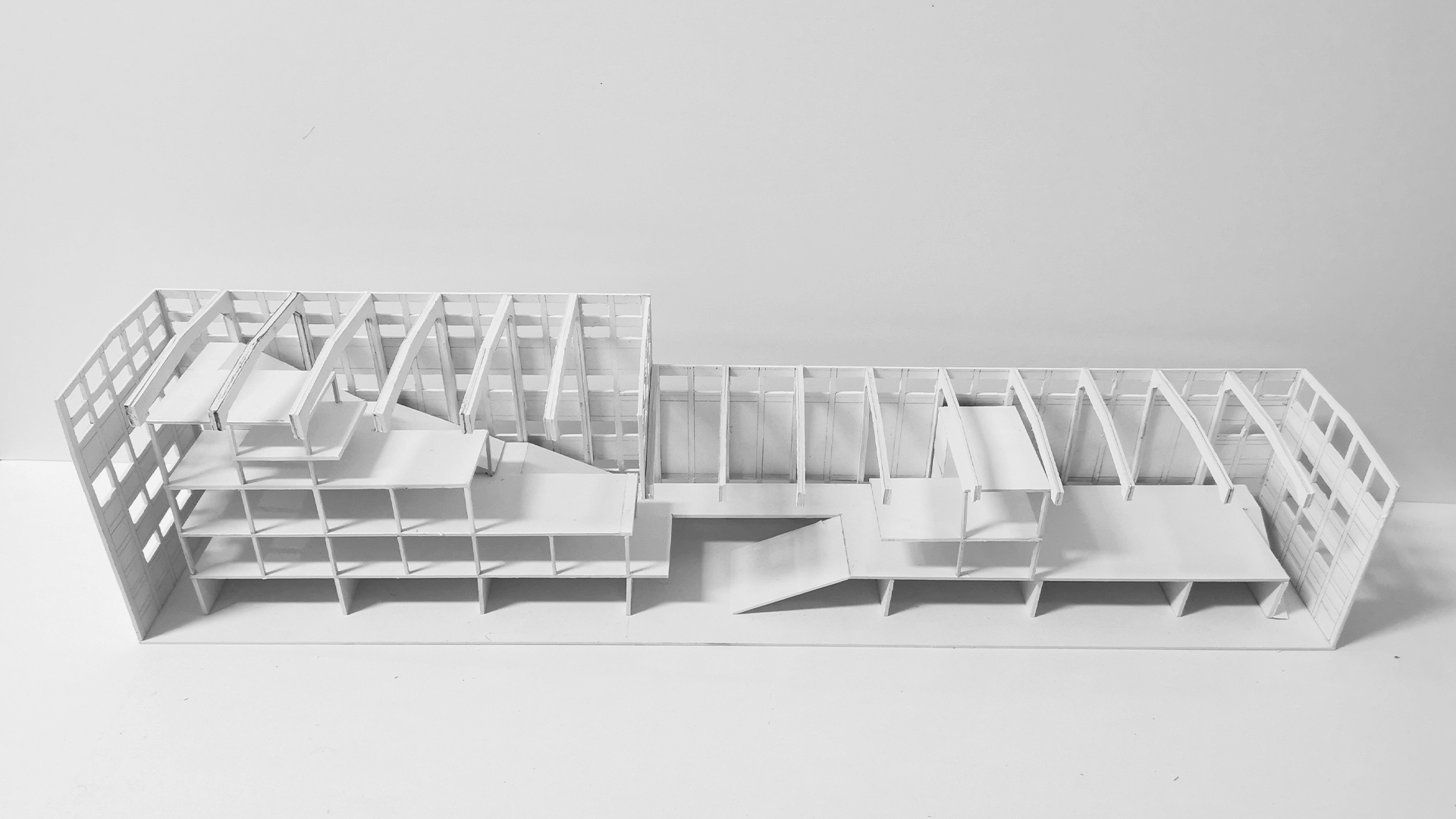 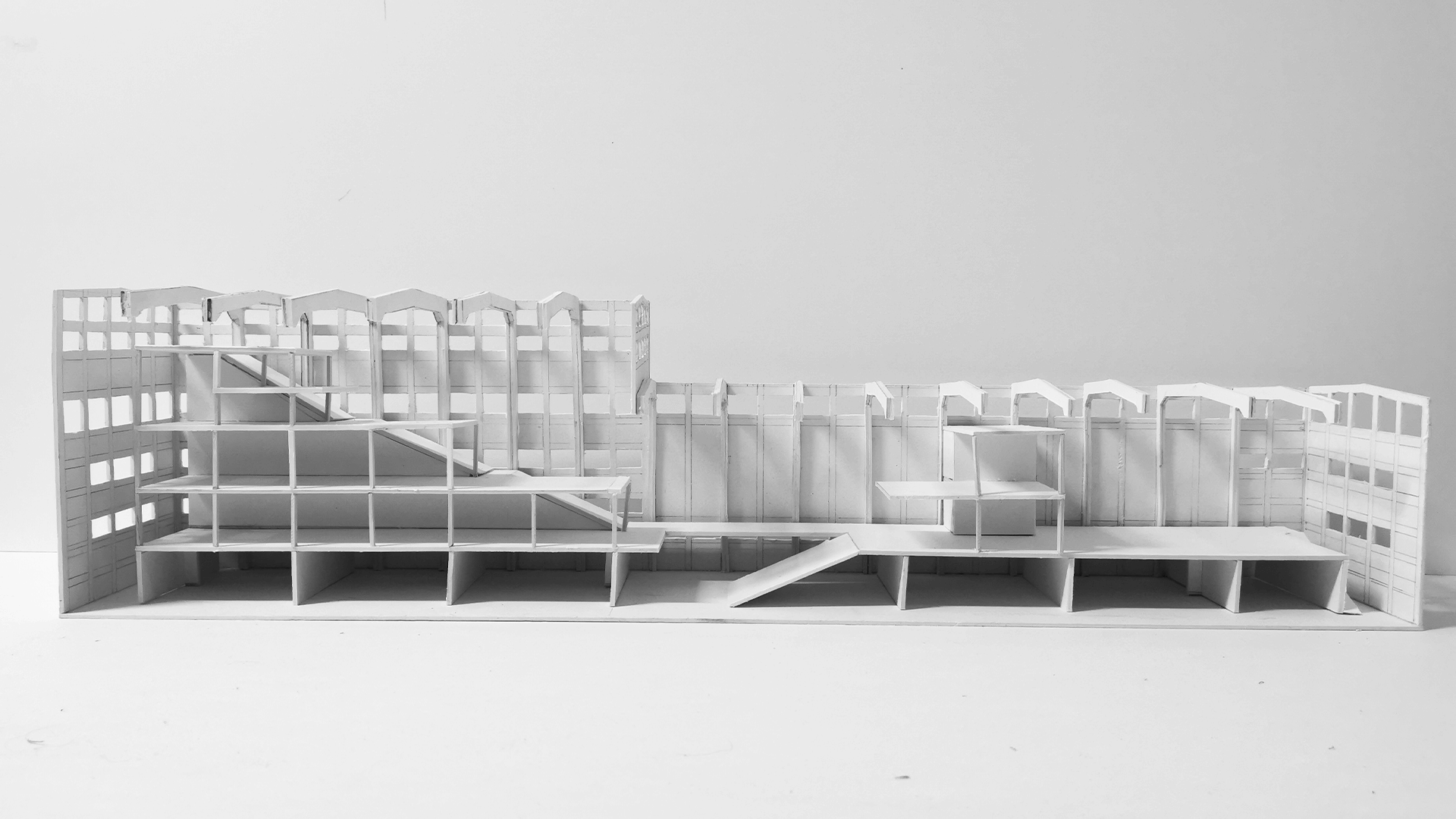 A building is to be created from the Mischerei as a stage for creativity, staging and performances and at the same time for creative work processes, encounters and communication. Under the title "Totaltheater Rüdersdorf" in reference to the design by Walther Gropius, a design was created which offers space for experimental forms of performance and work. It was important to preserve and stage the existing building and its substance in the best possible way.

The area of the former phosphate factory is to be converted into a creative quarter with good connections to Berlin and the surrounding area (Mobiltiy Hub and cable car). The quarter is to function independently so that commuter flows are avoided. Accordingly, the use envisages that the quarter will combine living, working, culture and leisure with the necessary everyday supplies, thus creating an almost self-sufficient satellite town.

The Rüdersdorf site and its surroundings are characterized by decades of open-pit lime mining. In opencast mining, layers of rock are removed in stages, leaving behind landscapes characterized by plateaus, hills and valleys. (Fig.) This can also be observed in Rüdersdorf and is integrated into the design as a spatial model.

The spatial concept was formed on the basis of the open-cast mining landscapes in the surrounding area. A landscape in the building, which gradually forms a kind of valley towards the center. It is realized by open levels, which are connected by generous staircases.
Under the landscape are the rooms for the theater on one side and the creative factory on the other. The formed levels can be used for exhibitions, performances or collaborative work, so that the large open space above the landscape becomes the staging of community, communication and work. The levels can be flexibly furnished and adapted to appropriate uses.

Dealing with the existing structure

The new structure on the inside ties in with the existing building only on the western façade, so that the other three façades remain untouched and subsequently also retain their characteristic form and feel and are renovated.  In the west façade, the stepped pattern is revealed to the outside.

The idea of Gropius' total theater will be taken up for the former Mischerei in Rüdersdorf. The Mischerei is to be turned into a building that offers several stages with flexible uses for artists, dancers, musicians, etc.... . A community of creative people is to develop and present seasonal performances, exhibitions and performances in the house. To make this possible, the design includes on the one hand in the form of a creative factory Atelies, workshops, workspaces

workspaces, etc... and on the other side in the sense of the total theater several flexible presentation areas, rehearsal rooms, etc.... including a large hall.  Not only the hall serves as a stage, but the entire building is intended to serve as an exhibition, presentation and staging in the spirit of Piscator. In addition to the performances, training courses or workshops can also be held in the building.

The new structure inside the former factory will be realized by a wooden skeleton construction, which will stand in contrast to the massive reinforced concrete skeleton of the existing building and will emphasize the contrast between old and new. The resulting open levels are acoustically enhanced with the help of soundproof surfaces and curtains. In terms of sustainability and gray energy, the existing building will be preserved as much as possible, the facades refurbished and new windows installed. Only on the first floor will one of the cross-braces of the concrete structure be removed so that large windows can be installed and open the ground floor to the outside. The wooden structure on the inside also shows its gradual form on the west façade to the outside.