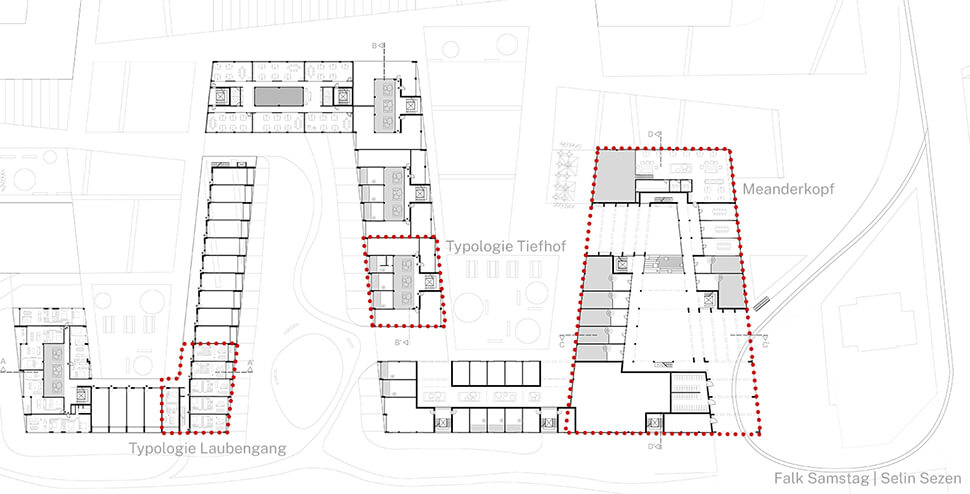 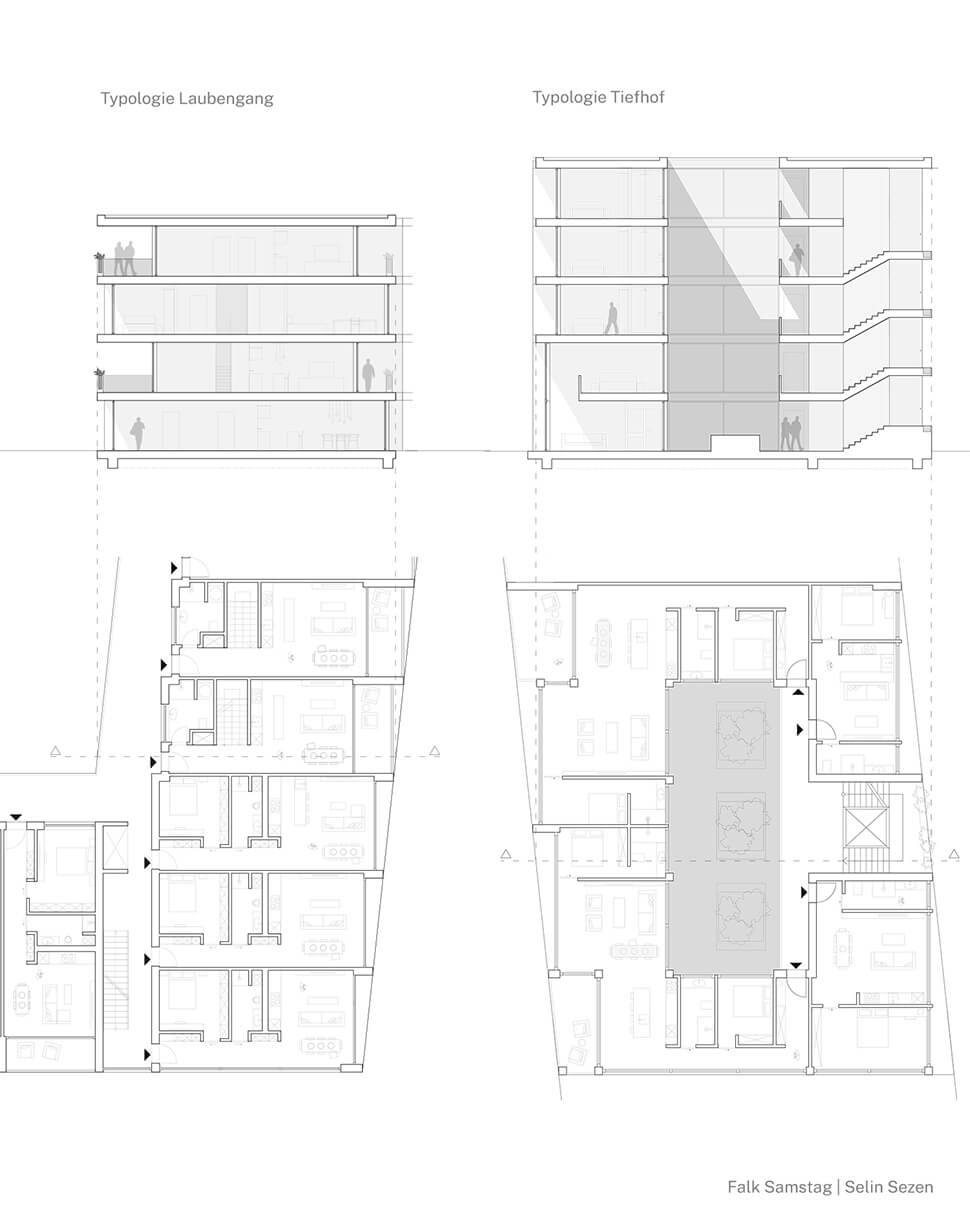 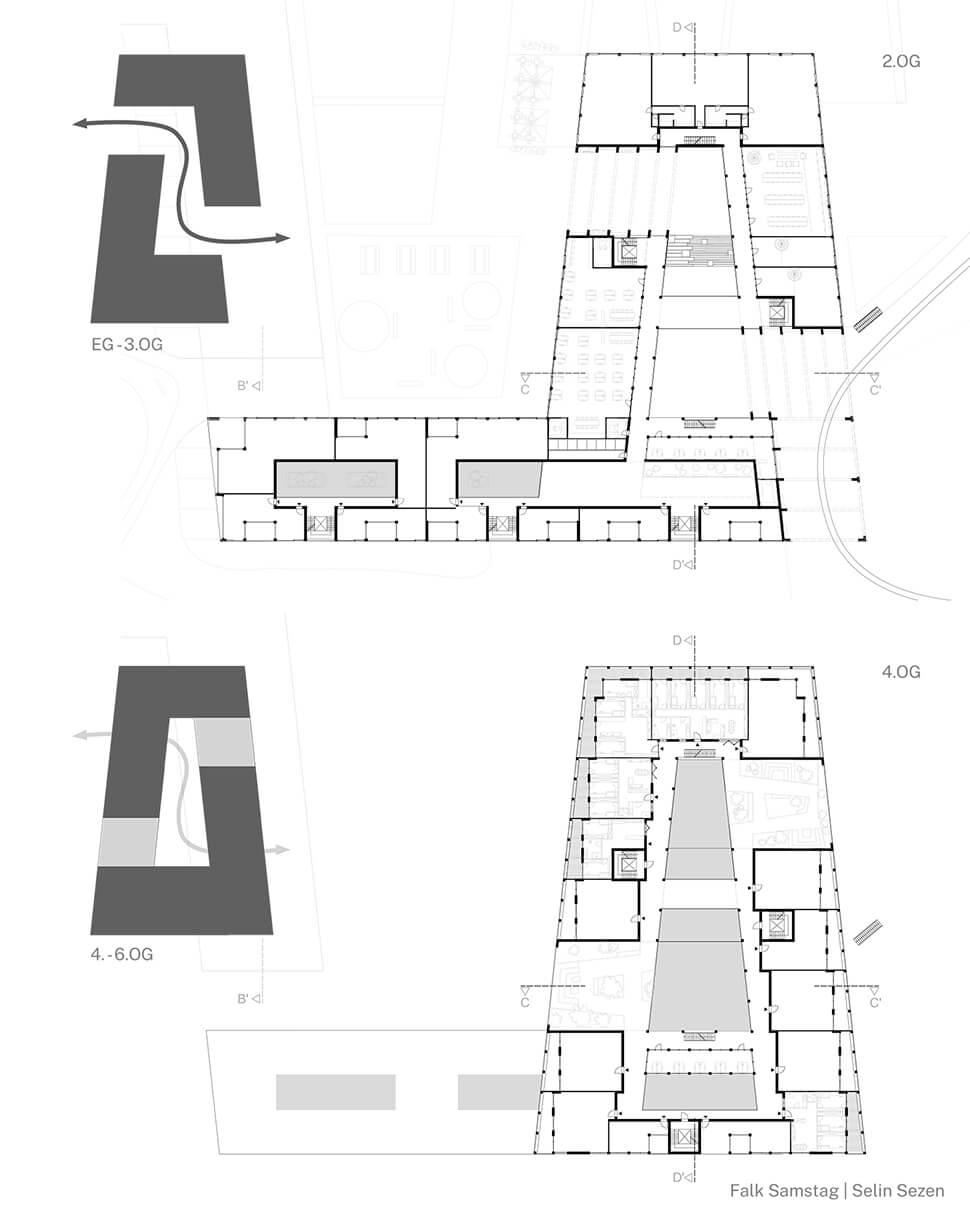 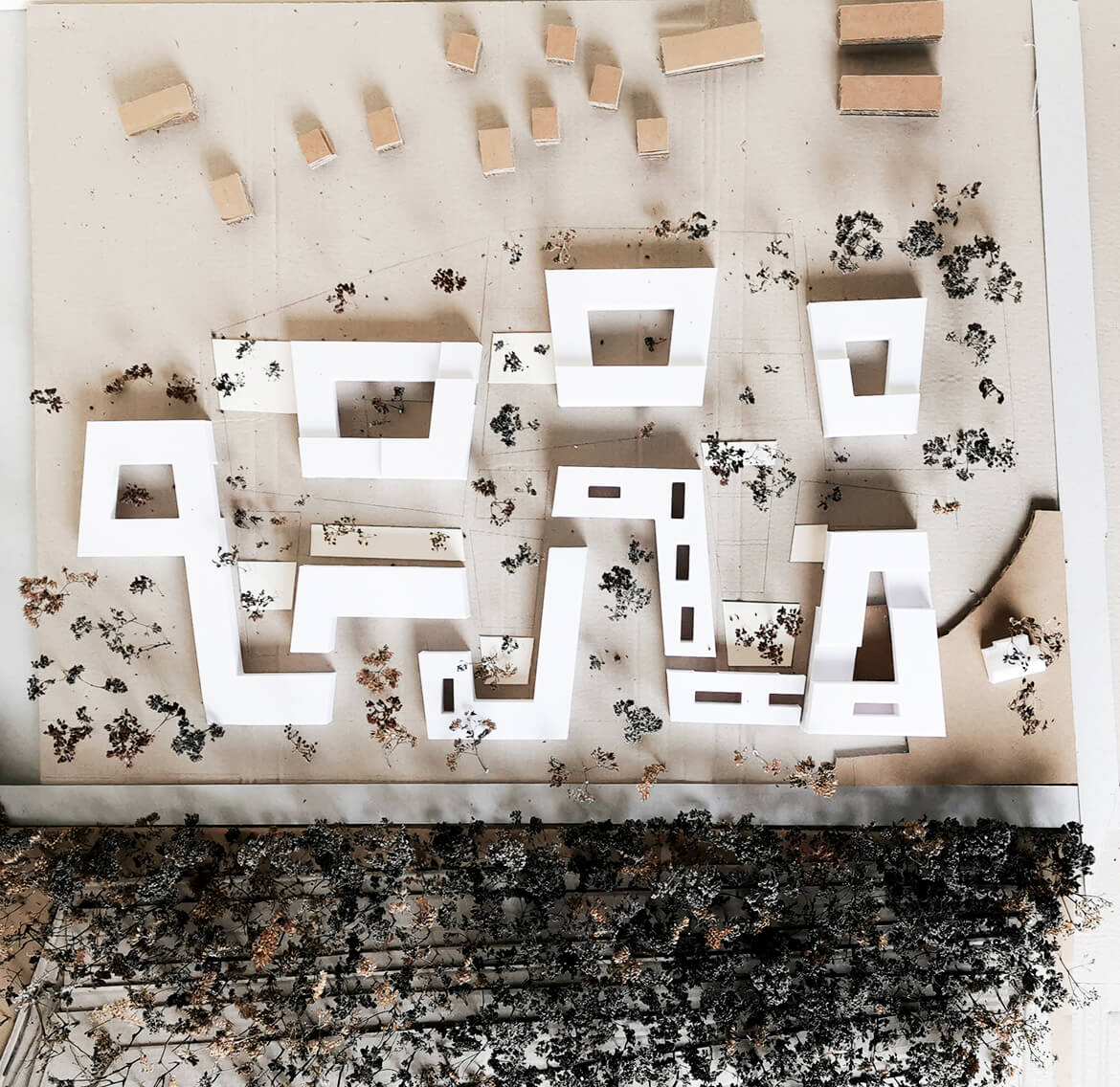 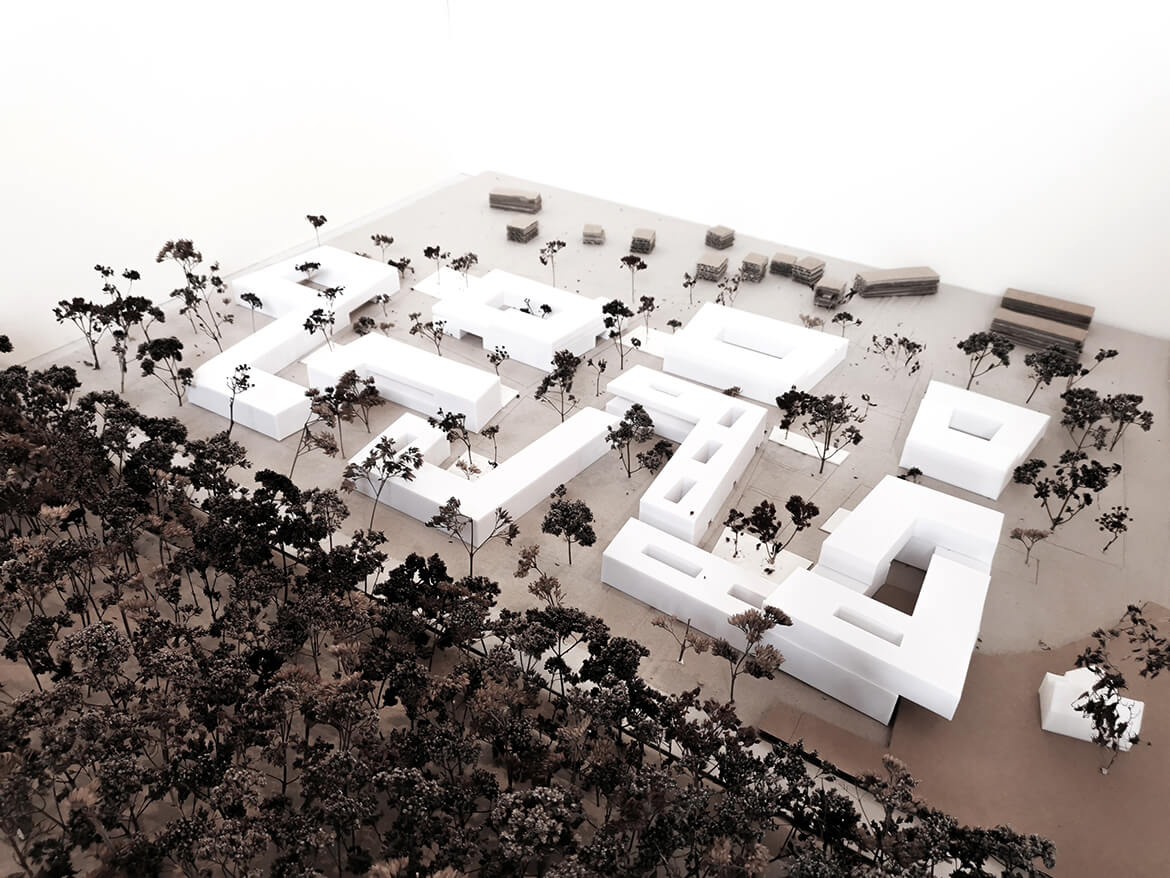 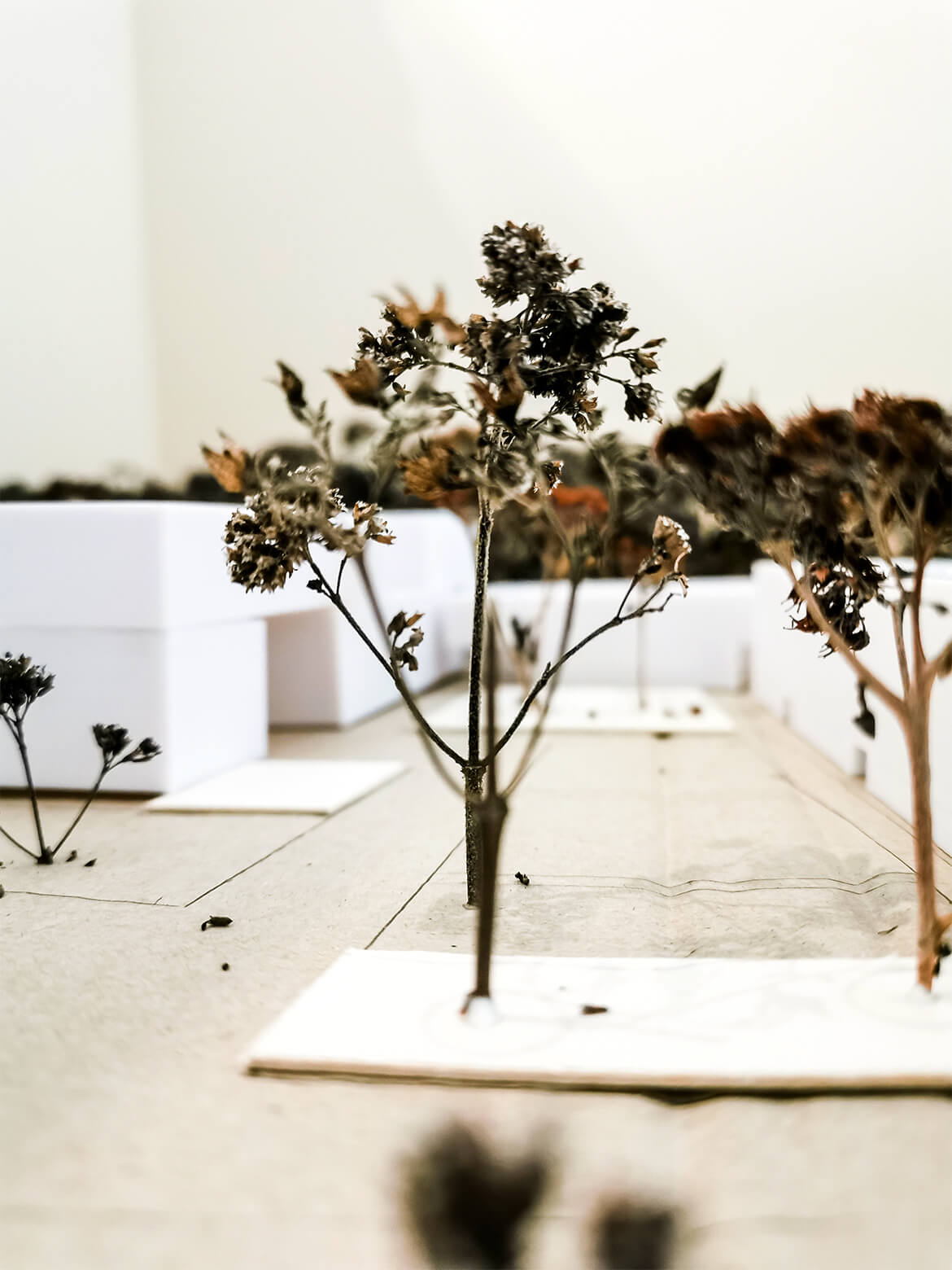 proposal urban living in the periphery of darmstadt, germany | 2021

How do we want to live in 2021 after the pandemic, what does sustainable building and living mean, how do we deal with traffic in the city and what is community? Questions that arose during the process of this draft which includes the delovpment of an urban area up to the detailed planning of typologies, floor plans and conceptional constructions

For a new quarter in the city of Darmstadt,  Germany, various outlying districts are selected that offer the potential and quality for an urban expansion. This is also the case at the southern entrance to the city, the Böllenfalltor. A location, currently used by a tram company, will provide space for a quarter with a mixed use of living, working and utilities. The basic urban structure of the design is a meander form in the south of the area, which is supplemented and connected to the north with atriums. In addition, the meander forms a large „head“ to the east at the „Böllenfalltor“ tram stop, which serves as the multifunctional main building of the area. It integrates the tram and bus stop, underground parking and offers space for shopping, working and living.

The spaces in between in the urban structure are treated differently. The courtyards to the south, with their reference to the forest, are to serve as „private“, park-like recreational areas with trees and water spaces, just like the green spaces indicated to the north. The other spaces in between, on the other hand, are intended to be semi-public or public areas for residents and visitors  to spend time in, for café seating, events,  playgrounds and more. The meander is defined by two building depths, which are filled with different typologies. In the 15-meter-deep sections, flats are accessesable via arcades. In the 20-meter-deep sections, flats are grouped around deep courtyards, each with a staircase. Together with the head, this makes a total of Four typologies. Arcade, courtyard, atrium, and the „head“ (main building)

The main building is the most important building in the design and also marks the entrance to Darmstadt. The lower four floors consist of two large ‘L‘-shaped volumes, which form an open space in the middle. This connects the integrated bus stop with the rest of the neighbourhood.Additionally, these first four floors contain shopping, working and event areas. The upper three floors accommodate student housing and also form two ‘L‘-shaped volumes. However, compared to the ‘L‘-shaped volumes of the lower levels, these are mirrored along the central axis.

The façades were sorted with the help of a grid that underlies the entire design. The different uses at the bottom and top of the head are reflected in the façade design. Generous glazing and sliding wooden elements as window openings create a harmonious façade image. Parapets and guardrails are formed by metal nets. The sections represent the characteristic rooms of the typologies.